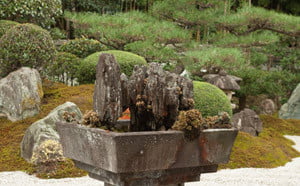 Since I’m working for Real Japanese Gardens and have guidebooks for japanese gardens to write, my boss decided, that it would be necessary for me to visit Kyoto’s gardens more often.

Of course it is.

But business is never the same as holiday, so my trip to Kyoto was also very exhausting, I can tell you!
But never mind my mourning, it’s only because of my german genes..

But coming back to Kyoto..

Of course I had to plan which gardens we should visit. And THAT was not easy!
There were some points I checked:

In the end we did not visit a lot of gardens I would have loved to see, but visited a lot of gardens with special openings.
I was able to take pictures of some gardens we did not had in stock and already replaced some at our page.
I could also visit two temple gardens which’s eBooks are on our priority list.
So from business view, the trip was a success!

From private view: there are too many people around at peak of autumn colours!

But let’s get started!

After arriving at Kyoto station, we headed out of the city to Uji.
Uji is famous for tea, but never ask someone from Shizuoka prefecture about it! Seems as if both regions have a fight over who’s tea is the better one..
In Uji lies Byōdō-in with the Amida-do, the Phoenix Hall.
Last year in early autumn the restoration works on the hall were completed.
When I visited the place in 2012 I couldn’t see it, only a transparent that covered the whole construction side.
Byōdō-in was built in 998 (Heian period) for Minamoto no Toru.
In 1052, still Heian, it became a buddhist temple and the Amida Hall was built one year later.
You will find it and the surrounding paradise pond garden in it’s original state.
Amida-do is also famous for being found on japanese money！ One time at the back of the japanese 10 yen coin and one time the phoenix of Byōdō-in on the 10.000yen notes.
Today it’s also hosting a museum about Amida-do. In the inside, taking photos is prohibited, but it features the wooden boddhisatva statues of the temple, which are really impressive.
The modern museum and museum shop were built in a way, that is not intruding the garden atmosphere and the moss zen garden next to the museum shop is very appealing too.
But except for the Phoenix Hall, there is not much to see of a garden. 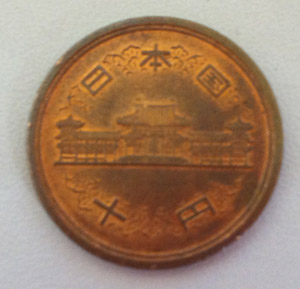 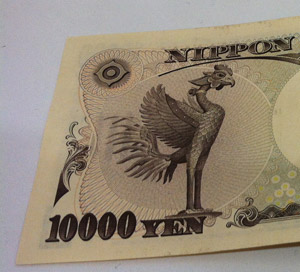 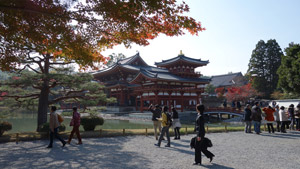 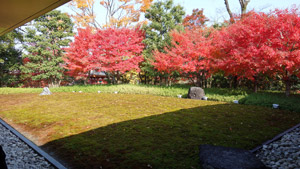 Because of high traffic, we changed the temple route and went to Tōfuku-ji after Byōdō-in.
It was exactly the same route I took 2 years ago, but don’t mind..
When you have enough time and also take this route, please visit the famous Inari Shrine, which is right on the way!
We hadn’t, so we went right to Tōfuku-ji.
The only destination I had was Reiun-in, a sub-temple of Tōfuku-ji. Tōfuku-ji could also be named as “Shigemori temple”, because almost all gardens were designed by him.
The most famous ones I have already visited before, but the lesser known sub-temples were on my list.
So we stepped into Funda-in at the beginning.
It is the only eBook about Tōfuku-ji, we already completed, so feel free to take a look!
http://www.japanesegardens.jp/gardens/secret/000099.php
Funda-in was built in 1321 but was burnt down in 1691.
Soon after, it was rebuilt.
The southern garden with it’s wide gravel space, is said to be designed by famous ink painter and Zen monk Sesshū. So the sub-temple is often also called “Sesshū-ji”.
Shigemori Mirei added the tearoom and the eastern garden. 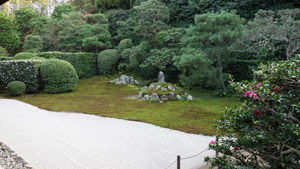 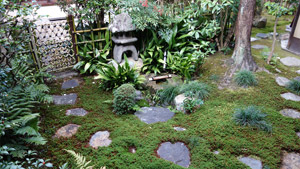 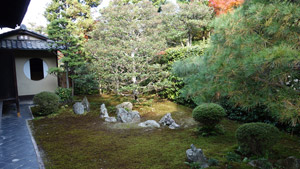 On the way to Reiun-in, we crossed the famous bridge above the maple valley. But it was very very crowded and I don’t wanted to stop for long, because all the other people also wanted to get a look and take pictures.
Reiun-in then was very quite and almost nobody was there. Perfect for me, as I don’t like crowded places.
The sub-temple was set up by Kiyōhōshū in 1390. Over the years, the garden fell into disrepair and was reformed by Shigemori Mirei in 1970-71 in conformity to an old picture, published in Edo period.
The stone in the center of the “Kusenhakkai” garden is the Iai-seki, which symbolizes Mt. Shumisen, where Buddha lives.
This stone is said to be given to the priest Shosetsu by the Hosokawa family because of his deed to the family in Shimabara war. 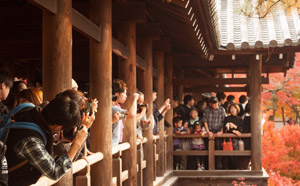 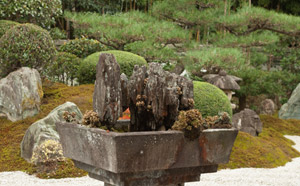 With Reiun-in, the first part of our tour was finished and we went to my hotel to let me check-in.
The second part of the first day was reserved for light-up events!

We went to Myōshin-ji, the head temple of the buddhist Rinzai sect.
The temple was founded by the former Emperor Hanazono in 1337 by the request from Daito Kokushi (Juho Myocho), the founder of Daitoku-ji.
I could stroll a little bit through the temple grounds before we met some other garden designer from Kyoto and went to special dinner event at Taizō-in.
Taizō-in is the oldest sub-temple of Myōshin-ji and was founded by Hatano Shigemichi, a daimyo, by 1404.
Besides 3 great gardens, Taizō-in also hosts the last remaining masterpiece of painter Josetsu, who is said to introduced black/white painting to Japan.
But during the guided tour through the temple, the monk (who is able to speak English) told us, that they of course only show a copy to the people.
We were allowed to watch the Karesansui garden “Motonobu no niwa” from the main hall during light-up event.
Then we were led to the “Yokōen” area, passed two more Karesansui gardens “Inyō no niwa” which are separated by a giant weeping cherry tree before we arrived at the pond of Yōkoen.
There we had traditional buddhist dinner, arranged by a star cook, at Daikū-an.
After dinner we had once again time to take pictures of the up-lighted garden. 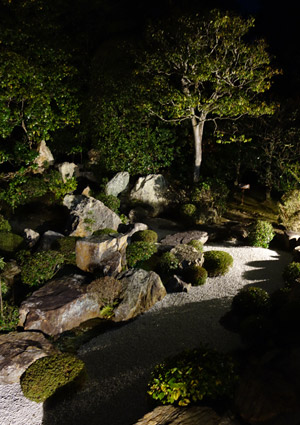 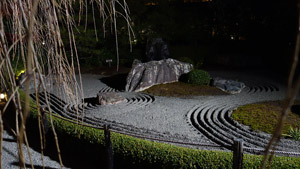 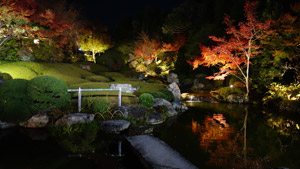 After completing the photo session, we went to another evening event at Nijo-jo.
The castle hosted the “Art Aquarium” event.
So we had the opportunity to walk the castle grounds in dim light, which was a great experience, while the Art Aquarium was a disappointment.
It was an installment with different small sized tanks in different shapes and highlighted with different coloured lights in which one could see different kinds of goldfishes.
But perhaps only me is lacking the sense for that kind of art..

This was the end of day one. Two more days to come!
Stay tuned ^_- 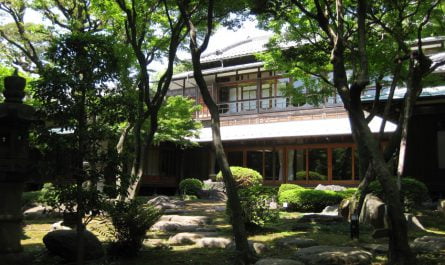 A modern concept of ‘shakkei’