Today I want to show you a reformed garden of one of the customers of our partner-page Niwashyu. 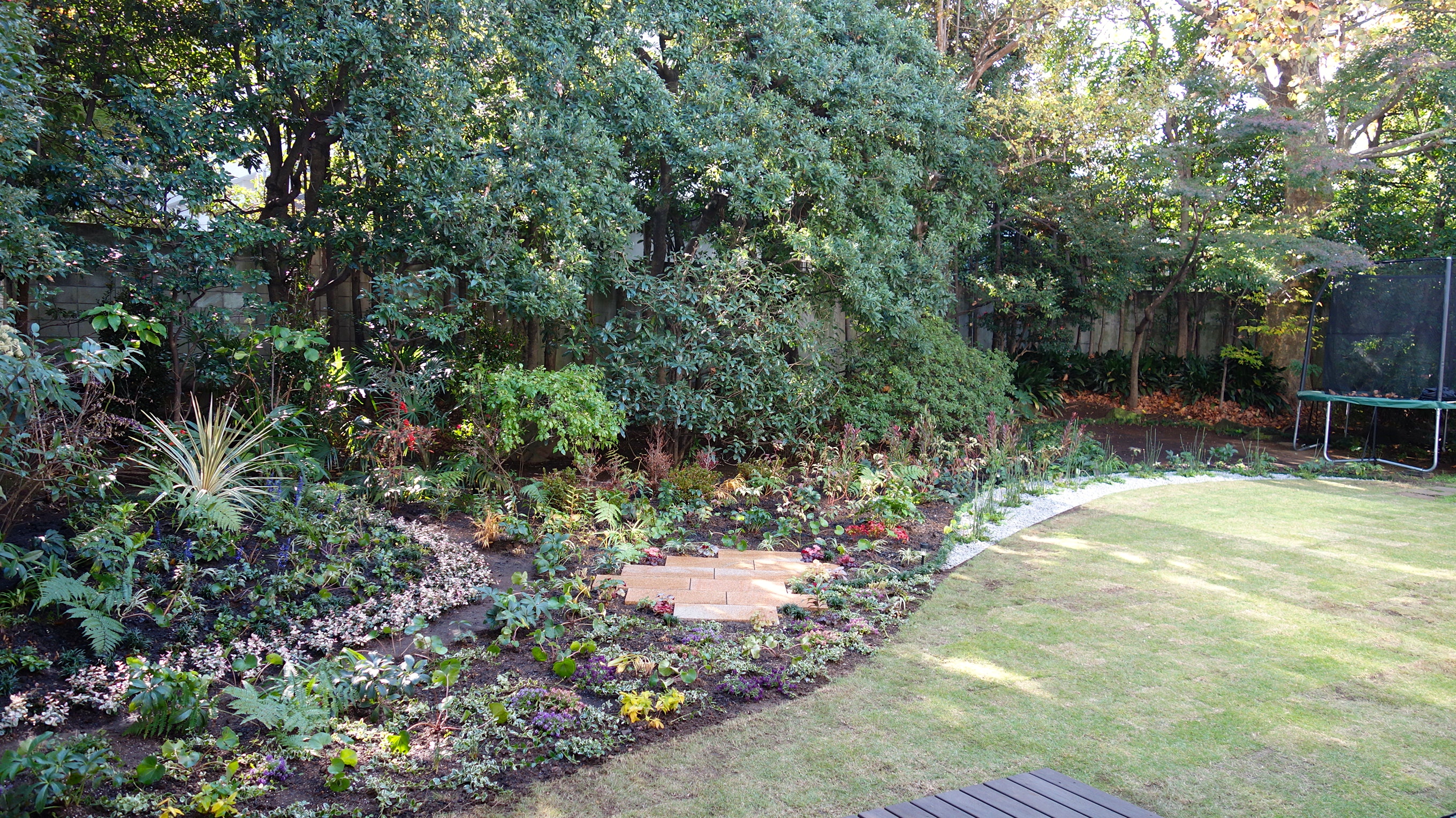 The customers wanted to have a bright, colourful garden with Japanese and European elements.
The garden belongs to a rented house and I had great restrictions dictated by the owner of the house.
No cutting of the large trees in the background was allowed and no parts, that would be permanently installed and cannot be removed easily.

But I should create a feeling of depth and lay the focus on the new garden, so one would not be overwhelmed by the green wall in the back.

Japanese gardens, modern or traditional, are using stones, shrubs and trees.
The usage of trees and shrubs was limited. I did not wanted to enlarge the wood of the back.
A large gravel area would fall under the restrictions of the owner and also would not fit the request of a colourful, European touched garden.
Also, the lawn area should not be changed!
Ornamental rocks would cause a large incision into the budget and therefore were skipped.

What remained was an artificial hill with a line of white leaved Trachelospermum asiaticum at the bottom, representing a water stream flowing into the distance.
This also creates a feeling of depth in the back of the garden.

I tried to use a lot of traditional Japanese plants to keep up the feeling of a garden in Japan.
But I also mixed in some typical plants used in Europe.
To bright up the area, my focus laid on coloured leaves.
My customers want a garden, which is nice all year round, so I used deciduous plants very rarely and always between evergeen plants.

There are some more eye-catcher in the garden. It should be interesting from 3 different viewpoints, over a length of about 20m.
Of course, one eye-catcher is on top of the hill. The plant is called Phormium tenax and is actually a plant from New Zealand, but often used in Japanese designs.
Another eye-catcher is the small terrace in the middle of the flowerbed.
To add the typical stone element of a Japanese garden, I decided on this small element.
It can fulfill different purposes.
One can make a step into the garden, not only looking from the outside. Take a close-up look at the plants in the background section, taking photographs of beautiful flowers appearing during the year or smell their fragrance.
It also is a place, where potted plants can stay during spring, summer and autumn.
If winter becomes too dreary, my customers can also add a planter with flowering plants, bought in a flowershop.
The last eye-catchers are the two gravel areas.
They are not like Japanese gravel areas, but give a contemporary touch to the garden.
One of those gravel areas follows the line of the lawn and divides the green wall background from the lawn area. To bring some colour in between, I chose Leucothoe catesbaei “Rainbow”.
Integrated in the gravel area, we also find some plants, carefully chosen to give a nice composition.
Those plants are a creeping conifer, Pachysandra terminalis, Farfugium japonicum and Equisetum hyemale. They have to be maintained carefully. Leaves of Farfugium should not grow too big.
The other gravel area lies in front of the wooden terrace and next to a white wall. The Equisetum gives a nice contrast to the wall.

Last but not least the European aspect of this garden.
In Europe, perennials are used a lot. A flowerbed is designed through various kinds of perennials with different heights and shapes. A great amount of perennials proves, that weed has only a low chance to overgrow the flowers.
A large part of the garden is covered with plants.
Constructed in late autumn, one will see the results of my plant usage in the next year. In front of the hill I almost only used low plants, but in combination with a ground covering plant.
In the background I used higher perennials and small shrubs, which will completely cover the area when established.
I also divided the garden into different parts.
There are some flowers to be found in every area, but most plants are only used in two different ones, to create a connection between the areas. There is for example the hill with common Japanese plants.
Divided to the foreground through the river of Trachelospermum.
In the foreground I used some of those Japanese plants too, but also a lot of flowers which are common in Europe.
Around the terrace I used the great variations of Heuchera, which perfectly match with the colour of the stones.
The connection to the background is made with Hosta. Here you will also find Anemone hupehensis and Tricyrtis hirta.
This area is connected with the area behind the crescent shaped gravel area through Leucothoe catesbaei “Rainbow”.
I used plants, which are beautiful in every season, so my customers can see flowers all year round.

They enjoy their garden very much and I am happy that I could design their new refugium. 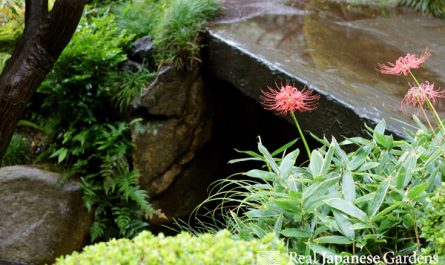 5 Bulbs for your Japanese garden