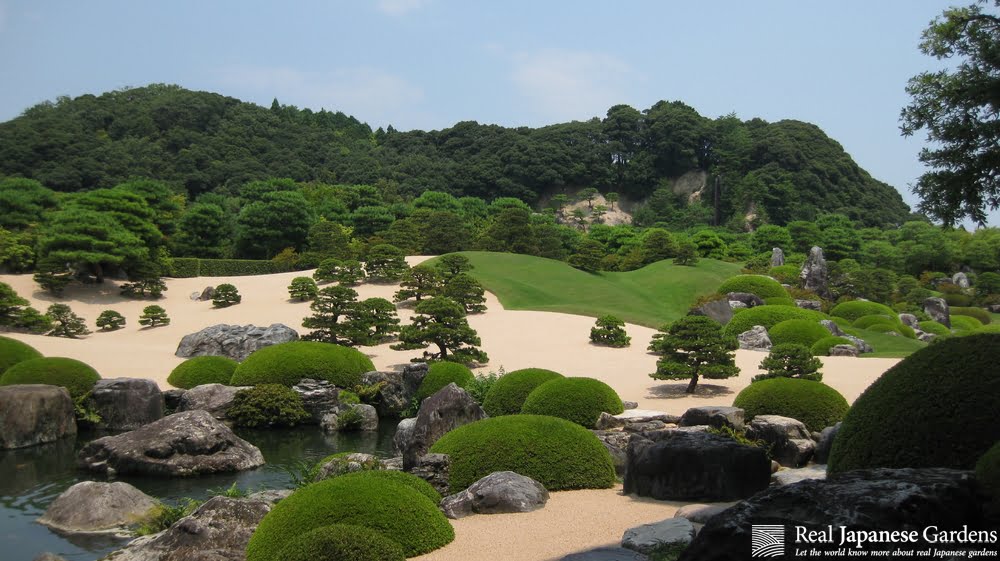 In early August 2015, I visited the Adachi Museum of Art.
Pictures of its gardens always appear here and there on the internet and I was always moved by the beauty of this not old, but old appearing garden.
I set it on my garden bucket list..

Before sharing my very own experience in the museum, let me tell you some basic information in advance.

The Museum was founded in 1970 by Adachi Zenko, who was then 71 years old.
Adachi started as a charcoal merchant when he was 14 years old.
He established a greater business later, which gave him the possibility to start collecting paintings.
He was addicted to art and Japanese gardens from his youth on.
When he planned the museum, it was clear that he wanted to combine showing his paintings and presenting Japanese gardens.
To him, both are connected to each other.
People who are interested in Japanese gardens will also recognize the beauty in paintings and vice versa when both forms of art are displayed next to each other.
So it is no coincidence that there are so many beautiful gardens in the Adachi Museum of Art.

There are several gardens on the Museum’s grounds, which represents different styles.
Even before entering the Museum, the visitor is welcomed by the “Reception Garden” (歓迎の庭 – kangei no niwa).
This Reception Garden already introduces the beauty of Japanese gardens to the visitor.
We find a stream made of sand with some rocks set into the scenery. The banks are covered with beautiful moss and Acer will give the colorful touch in autumn.
On the right side of the entrance, we see a more open space with gravel, but in a similar design style. This garden can be seen from the inside too, which gives a new viewing-angle to it. 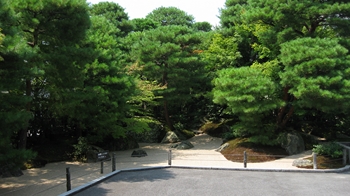 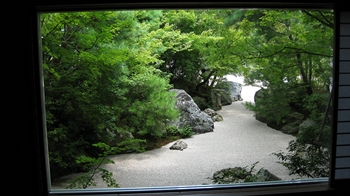 The main garden is the Dry Landscape Garden, which is connected to the Moss garden (苔庭 – Koke niwa). Both gardens are the first ones to be seen when entering the Museum.
I went straight to the windows to watch the gardeners working at the pines. The care for pines is one of my favorite works. I would have loved to join them! 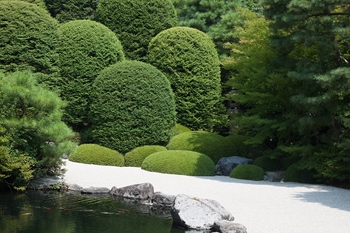 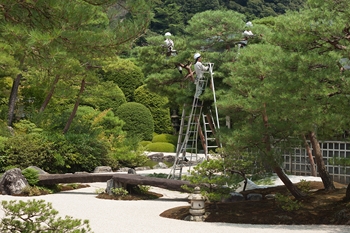 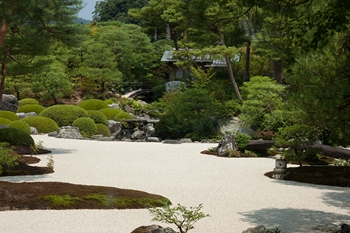 The next garden is the garden of the tea house Juryu-an (寿立庵).
It was named by Sen Soshitsu, a tea master of the Urasenke School.
The house and garden were built in imitation of Katsura rikyu’s Shokin-tei (松琴亭) in Kobori Enshu’s style.
It can only be visited when applying for having tea there. A short explanation and demonstration and tea cost 1500 Yen.
But there is also a small garden in front of the house with a small waterfall feature, which can be enjoyed without entering Juryu-an. 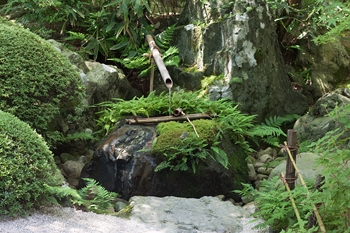 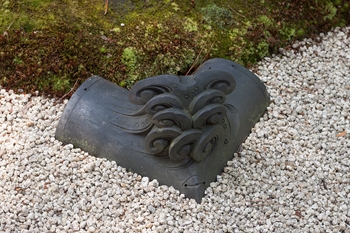 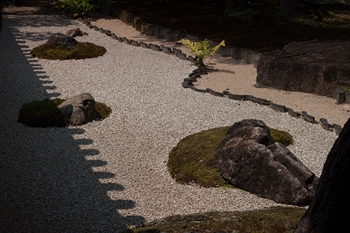 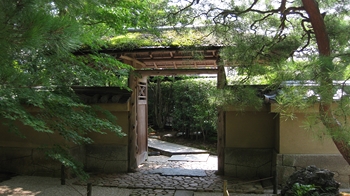 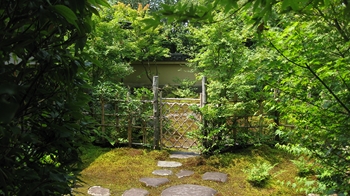 The next room to be entered is the lobby, from where one can see the Moss garden and the Dry Landscape Garden. One can sit down and watch the garden in peace. 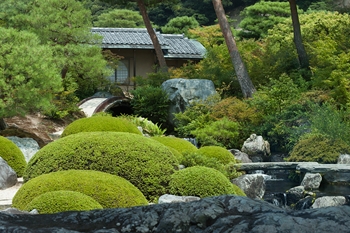 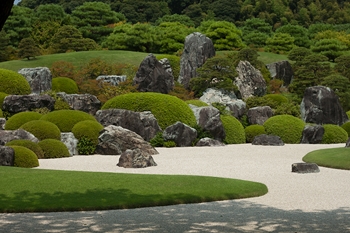 The best view one has from the Café called “Midori” (翆). It has an easy pricing system. Every drink costs 1000 Yen. 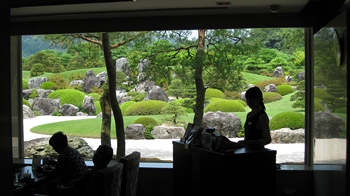 In front of the Café Midori is the section for art for children. I think it is a nice idea to also include this type of art in a museum. It is seldom seen elsewhere.
Around the corner is one of those windows, showing a “living painting”. This is one specialty to Adachi Museum of Art. There are several places, making use of this form of garden presentation. I really love it!
Through this window, one can see the connection between the Dry Landscape Garden and the White Gravel and Pine Garden. It gave the garden construction crew a hard time, but then they found it best to use a mound. From this window, the great waterfall of 15m height can also be spotted for the first time in its great beauty. It was named after the mountain it was built in, Kikaku Waterfall (亀鶴の滝). Yes, you have seen it right. This waterfall, which fits perfectly into the surroundings, is an artificial waterfall!
It was built in 1978 to celebrate the 8th anniversary of the museum.

The next garden is the Pond Garden (池庭 – Ike niwa). It is the oldest garden in the museum. It already existed before the museum opened and became the entrance in 1970. In 1984 it was remodeled to the existing state.
What I liked best was the part to the left, where the new building and the pond meet. By the way, this part belongs to the remodeled area from after 1984. It was not part of the garden in 1968. 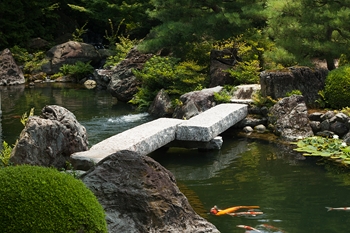 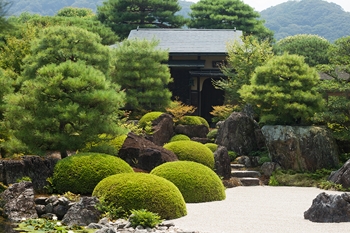 Between the Pond Garden and the White Gravel and Pine Garden lies a building in Japanese style, which contains the windows for the living hanging scrolls (生の掛軸).
It is not easy to take a nice picture of them. People who are standing in front of the White Gravel and Pine Garden, are visible in the hanging scroll frames, so one has to be fast. Another problem is to get the colors right. I was not lucky and all my pictures ended too faint with no nice colors..
Maybe Photoshop can help me someday, when I have time to play around.
The last garden, the White Gravel and Pine Garden (白砂青松庭 – Hakusaseishou-tei), was designed by Adachi himself. He loved the painting “Beautiful Pine Beach” from Yokoyama Taikan and constructed this garden as an image of the painting.
When I saw this garden, I had a different idea. Next to the great Kikaku Waterfall are pine trees standing on yellow rocks. I thought the constructor of the garden had the intention of implementing this image into the garden. But I think it is nice, that even the surroundings of the waterfall mirror the White Gavel and Pine Garden.
When designing it, Adachi used almost only stones from Tottori prefecture, but also some from Shikoku. Left of the waterfall, he used Akamatsu (Red Pines) to express the female part and used Kuromatsu (Black Pines) to express the male part to the right.
It is a garden, that would not be able to build today in the same form, because many rocks were used, that would be impossible to quarry these days. 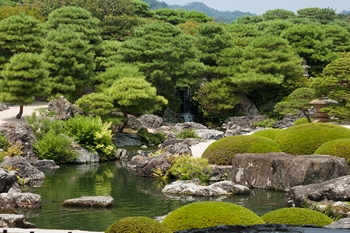 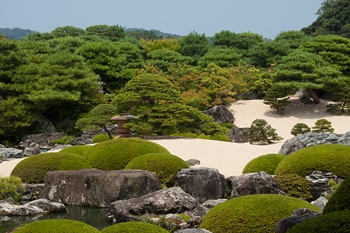 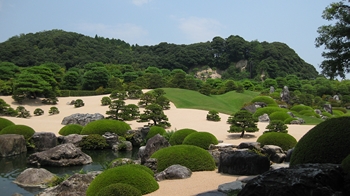 After this garden, the exhibition rooms follow. I looked at every painting, as I am fascinated by the Japanese ink paintings. But actually, I was in a hurry and rushed through the last part of the exhibition..
Yes, the Adachi Museum of Art gardens were not the only gardens I visited this day. 3 others followed.
If you want to visit the ​Adachi Museum of Art, you can be sure that Shimane is no waste of time. There are quite some other gardens around and Yamaguchi Prefecture with even more gardens is not far!

An Audio guide can be rented for 500 Yen

There is a free parking lot for 400 cars.

The following links are tied to the Amazon Associates program!

My Life in Japanese Art and Gardens: From Entrepreneur to Connoisseur – Adachi Zenko 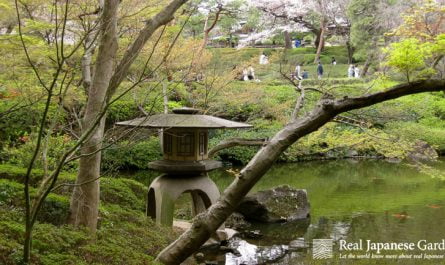 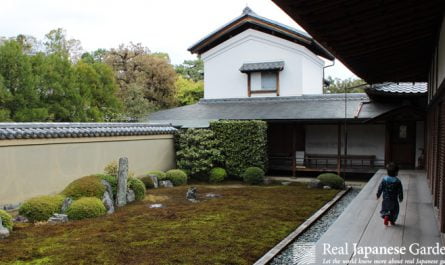 The Japanese Garden with Kids 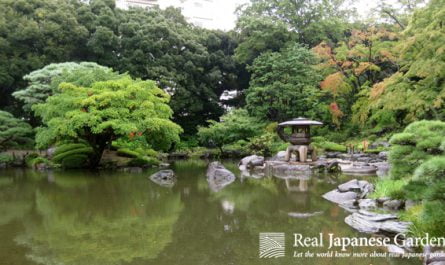 5 thoughts on “Adachi Museum of Art”