I would like to leave with the following short series of posts about the history of traditional Japanese gardens. During my time at RJG, I delved into their realms to begin understanding the complex reasons and methods behind their creation and composition. To begin this series, I would like to pose a few questions and thoughts that I first wrote down at the start of my work here – for those in the know, be prepared for the naïve… and yes, you may laugh! 😉

Hopefully this will give you an idea of the thought-path I followed during my time at RJG.

My first question relates to the very essence of the traditional Japanese garden:

What are the reasons for gardening in relation to Buddhist practices? Is gardening a practice undertaken to help reach enlightenment through hard work and concentration, (perhaps just one sect of Buddhism)? Or / and were they created to add enjoyment to one’s own life and others, through nature and reflection upon life (recreational purposes)?

The first point here is not just something I’ve come across in my thus far limited reading of Buddhism and traditional Japanese gardens. It is also something I’ve recently encountered in what has fast become one of my favourite books – ‘Landmarks’ by Robert Macfarlane. The author explains a moment in his life when, after reading about and walking in wild landscapes, he reaches a realisation. The more concentration and attention we give something, the less selfishly we act towards it. Perhaps this may seem obvious, as a mother caring for her child. For me it was an important moment (whilst squashed between many Japanese on the subway)… an idea that instantly made connections to the practice of gardening and Buddhism. If we spend our time walking through, working in, observing and studying nature whether on a vast mountain or in a small garden, the more we understand the true value of it. We begin to understand the vital connections that run through it, as the finger-like hyphae of fungi threading a matrix of soil together. The more we then want to care for it, to continue observing and enjoying (perhaps you could argue there’s some selfishness involved). However, the point is that the concentration and hard work put into gardening by Buddhists, like one who spends a lifetime hiking through vast landscapes, achieves a somewhat selfless state towards the focus of one’s concentration; and perhaps it is this that leads to the ultimate goal of enlightenment.

A second thought, leading on from the first, asks about the development and maintenance of gardens:

As my limited reading and understanding maintains – traditional Japanese gardens aim to ‘imitate’ nature, not bend to the will of the gardener. This form of gardening seems to go hand-in-hand with the conservation of nature.  However, it is hard to escape human influence when creating a garden, as some aspect of it will be changed by the gardeners decision, and thus will – especially apparent in gardens which have box-shaped bushes, for example.

This provokes debate about the lines between human influence and the ‘natural’, untouched by humans, (if such a line to divide us should exist). Thus, are traditional Japanese gardens different to contemporary gardens: allowing nature to extend more influence? That is to say that modern counterparts are more carefully exacted by our will. However, all of these elements are chosen and maintained, if not controlled, by the traditional Japanese gardener.

So the question here is: to what extent is nature allowed to govern – the invasion of an occasional plant species from the surrounding environment of the garden?

A balance of human and non-human influence:

Is the practice of gardening in Buddhism a quest to seek ultimate balance with and within nature? The gardener first invites nature into a space through the initiation of a garden, and strives to create something beautiful in cooperation with it. However, examples such as dry karesansui gardens appear the ultimate control and restriction of nature – largely due to the scarcity of plant life and water (although this is often represented within the stones used). Is this apparent control a visage that needs to be peered more intently through – is it actually as restrained and ‘unnatural’ as it first appears?

An exploration of these questions will follow in the next two blogs; I hope that they will provide you with some thought-provoking enlightenment too! 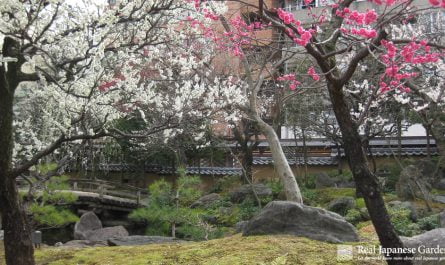 Planting on a slope in a region with strong rain? 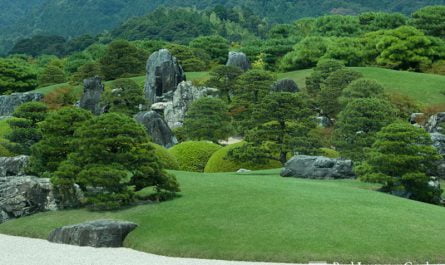