Through the act of creating a garden, there is an inherent manipulation of nature. However, in the early forms of Japanese gardening, this was undertaken in order to serve nature and the deities that lived within the ‘garden objects’, such as rocks. It is true that many civilizations’ globally have held a fascination with rocks, and have moved them through the landscape since early times – as in Stone Henge and Easter Island, as well as within the Shinto religion of the Japanese. During the use of Chinese geomancy and fusui (which took effect strongly during the Heian era of 794-1185), elements of nature were carefully considered in respect to the whole universe and thus their positioning in the garden. The development in use of rocks included great contemplation of their natural individual form, including colour, shape and size – carving them was likely never considered at this time.

Over time they were given humanistic qualities – with the use of terms such as ‘face’, ‘back’ etc. as well as names. Indeed, it was a goal to be able to show a stone’s personality through its positioning in the garden. The point of prominence here is that this was all done in respect of nature, which entailed a deep contemplation of the individual entity and its place within the wide expanse of the universe – although this may have become slightly absurd as it progressed. In regard to plants and trees, these were again chosen and placed in relation to geomantic principles, which sometimes included auspiciousness. The ‘sakutei-ki’ written during the Heian era stresses the importance of both using Chinese geomancy and using intuition in design. Its guidance reveals the impetus to be in harmony with nature itself, for example in the phrase ‘kohan ni shitagau’: ‘following the request’ of a rock, stream etc. Therefore, the balance between human gardener and non-human nature within the traditional Japanese garden is inherent to its creation and maintenance. It is thus more than ‘important’: it is vital to the garden’s existence. During the short 40-year Momoyama era, the growth of the rustic roji ‘dewy path’ garden took place, (e.g. like those, which can be seen within Katsura Rikyū). It focused upon nurturing Zen practices through the wabi-cha ‘tea ceremony’. The roji served to prepare the visitor for the wabi-cha by enhancing their sense of self-awareness and mindfulness. It had a much more rustic feel in that these spaces appeared somewhat ‘overgrown’ with moss. However the thought behind these designs is deep and well considered. There was a lack of brightly coloured flowers, and a preference to evergreens, so that attention did not become distracted. Stepping-stones (rocks which often replaced the previous stand-alone formations) were washed before guests arrived and kept clean of moss, however moss was often encouraged to grow as a ground cover. It was also allowed to grow over wooden gates within the roji, creating an aged effect. Lichen also emulates this, tying together both trees and rocks in the garden. However, the encroaching of moss and lichen and falling of a few leaves is possibly the only real act of nature upon these gardens. In this way, man manipulated nature in order to achieve a certain effect of self-awareness upon the mind.

A ‘second nature’ also became prominent with Furuta Oribe (1544-1615), who preferred to create a roji with a sense of suki (taste – likely personal) and asobi (play). This meant introducing hewn square stepping-stones, and placing pine needles beneath broadleaf trees. This ‘second nature’ is more akin to projecting man’s own will upon the local environment.

There was also a move away from pure karesansui, to o-karikomi (e.g. Raikyū-ji) – the pruning of azalea (satsuki) and camellia (tsubaki) bushes into topiary formations of waves, mountains (such as Mount Horai – thought to be the center of the universe in Buddhist philosophy) and the crane and turtle islands from Buddhist belief and Chinese mythology. Ponds and islands of stone had originally depicted these scenes. Although most were linked to Buddhism and the search for enlightenment, the actual shaping of plants surely marks a more evident change towards nature manipulated by man. However, such topiary had been used in previous eras – only not to this extent and extravagance. It was often paired with karesansui, alongside white sand and rock formations. This burst of creativity in topiary was led by one man (Kobori Enshu 1579 – 1647), and was not to last on such a level.

Simultaneously, gardens of Daimyo feudal lords were growing more exuberant in order to show off power and wealth – karesansui formations used larger rocks and the landscaping moved away from the traditional, with bridges for the first time connecting the mainland to the Isles of the Blest, originally symbolized as distant and unreachable. This era possibly marked the beginning of a different direction in gardening: one less attached to spiritualism and natural forms. It also contrasted sharply to the former ‘void’ karesansui gardens.

Edo era gardens incorporated rocks that made reference to the kabuki theatre and prostitutes of the ‘floating world’, as the time was referred to. Shakkei ‘borrowed landscape’, which had been used throughout many eras, took on a new grandeur – creating elaborate landforms of famous sights as well as those from literature called Shukkei. Gardens were designed in order to stroll through, and many such sights observed along the way (such as in Rikugi-en). Although this made reference to Buddhist pilgrimages to many temples, the overall garden design signifies artificiality, a move away from nature and Buddhist principles.

The following Meiji era marked a more obvious move from nature and gardens as landscapes, to ‘mindscapes’. These were more a statement of man’s influence upon nature, his egotistical will. The later periods of Taisho and Showa see the fall of gardens into disrepair, with fewer visitors. A creation of Western style parks ensued as Japanese designers sought new perspectives overseas (e.g. Shinjuku Gyoen). The relation of these to nature perhaps holds its own story.

One modern guide on traditional Japanese garden creation and maintenance explains that trees were often shaped inspired by those that grow in naturally exposed areas. For example, trees upon the flanks of a mountain or by the seashore. This produces the kinked and sinuous lines we associate with their aged appearance. Young trees are bent into shape and pruned in order to give a balanced form. This helps to harmonise and mature the garden. It is said that such vegetation is maintained to uncover and enhance their natural qualities. The pruning that is advised can also aid the tree in its growth, and keep it healthy. Although inherently management may be seen as somewhat unnatural, it is man working together with nature.

Within a variety of garden types throughout Japanese history, the practices of geomancy, Buddhism and the search for enlightenment appear to have implored man to work in harmony with nature. There are some departures from this, however, such as in the ‘second nature’ of Furuta Oribe, the practice of o-karikomi and in the later periods up until the present. I believe there is a lot to learn from the early eras that have a close relationship to nature.

In the final installment of this series, I will concentrate more upon karesansui gardens, which hold the answer to my third question.

A Garden Play of Colors 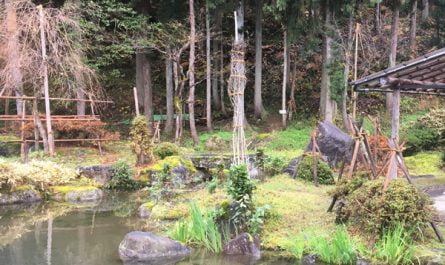 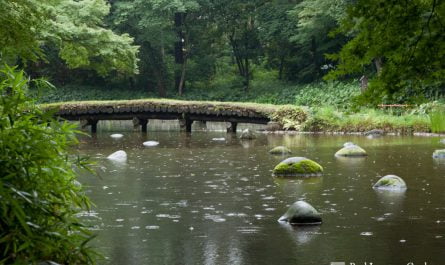