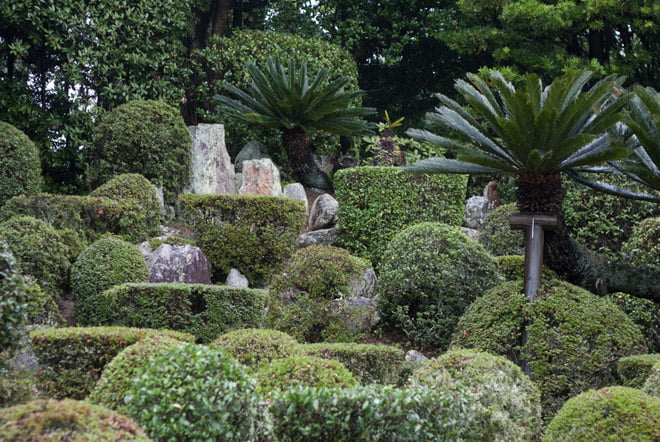 Before the daimyō system was demolished in 1871, the Tōtōmi Province was one of the most important provinces in Japan and played an important role along the Tōkaidō route from Kyoto to Edo.
Several different daimyō held power over this area, but after the establishment of the Tokugawa Shogunate, when it fell back to the Tokugawa family, only trusted vassals became Tōtōmi no kami – guardian of Tōtōmi.
One of these was Kobori Masakazu, better known as Kobori Enshū. 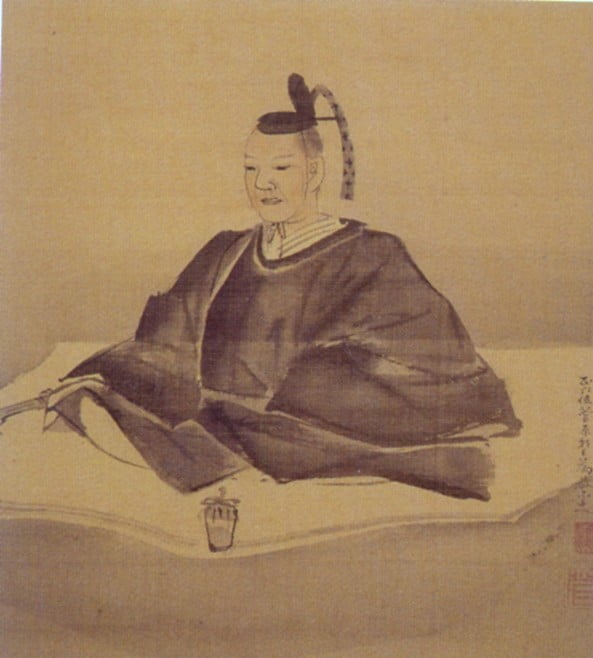 Kobori Masakazu (1579 – 1647) was born in Ōmi Province (Province surrounding Lake Biwa) and also became the daimyō of Ōmi.
He was trained in architecture, garden design, flower arrangement, painting, poetry, and tea ceremony.
Today, Kobori Enshū is best known for his tea ceremony style “kirei sabi“, which translates to elegant simplicity, and for his exquisite (garden) architecture.
Some of his finest works are Katsura Rikyu Imperial Villa in Kyoto, Nanzen-ji, Daitoku-ji, Nijo-jo and the original castles of Fujimi, Osaka, and Sunpu.

Due to the fact that Kobori Enshū was the guardian of the Tōtōmi Province, there are a lot of gardens in his personal style in the area.
Only a few of them are attributed to him like the garden of Ryōtan-ji or Chōraku-ji.
Other gardens like Mankō-ji, Rinzai-ji or Iō-ji do look like one of Kobori Enshū’s gardens, but there aren’t reliable documents proofing this.

Kobori Enshū had a lot of disciples, who also were active in Tōtōmi Province. This makes it likely that a lot of these gardens were constructed by them.

Today I would like to introduce some of the gardens I already have been to:

Ryōtan-ji has the most famous garden among these temples. In 2017 it was featured in a popular TV drama around the story of the house of Ii. Ryōtan-ji is the family temple of the Ii family and even the Emperor (Akihito) and his wife have visited it once.
It was constructed at the beginning of the Edo Period (1603 ~ )

Mankō-ji is the only one of mentioned temples, which is located in Aichi prefecture, however, not too far from the border to Shizuoka prefecture.
This temple is not visibly open to the public, but when the monk or his wife has time, they allow visitors in.
They do not speak English, but have a great old book introducing the gardens of the Tōtōmi area – also in English -.
The garden of Mankō-ji was built around 1706.

Iō-ji’s garden shows a different style than the other gardens. It has no pond at the foot of a mountain, but therefore uses stylized shrubs attached to rocks and Cycas revoluta as a design element.
This garden is often mentioned as a garden done by Kobori Enshū himself, but the temple pamphlets say, that this is not for sure. It was constructed around 1620.

Chōraku-ji is open to the public against a small donation. It is possible to view the garden from inside the buildings, but it can also be enjoyed by foot. This is a very rare occasion because usually, these kind of gardens are not open to walk in.
The garden gives a beautiful view when the Enkianthus changes their color and the autumn leaves shine in brilliant red. However, this is also the time of big spiders, which build their webs over the pathways in the garden.
The garden of Chōraku-ji was designed by Kobori Enshū and calls himself one of Enshū’s three great gardens.

The following links are tied to the Amazon Associates program!
When buying after clicking on one of the links, we get a tiny portion of Amazon’s share. 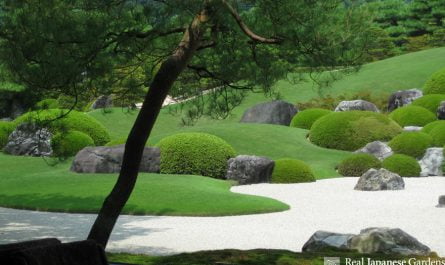 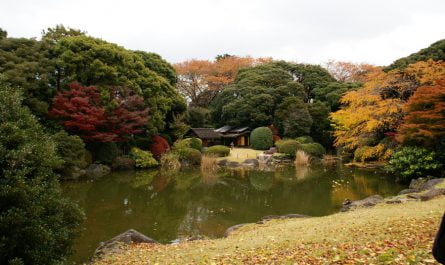 [New eBook] The Teahouses of the Tokyo National Museum