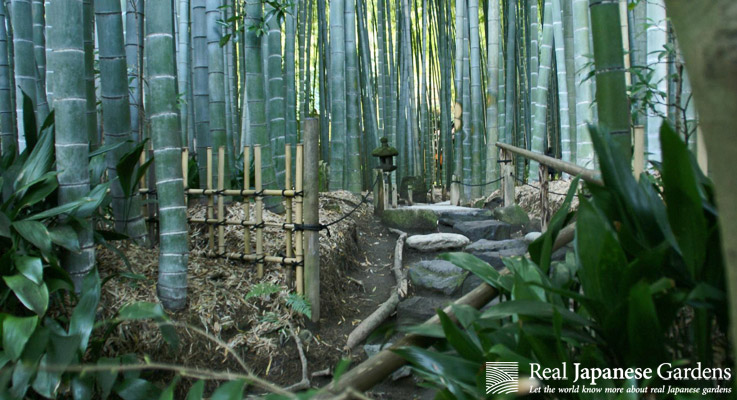 Hōkoku-ji is a small Zen temple in Kamakura, world-famous for its bamboo grove of more than 2000 Mōsō bamboos. It is also called Take-dera (Bamboo temple) for that reason.

The temple was founded in 1334, a time of turbulence and unrest in Japan. The Kamakura shogunate had just been defeated, and the first Ashikaga shogun Takauji established his rule in Kyoto. Takauji’s grandfather, Ashikaga Ietoki, ordered Zen priest Tengan Ekō to found Hōkoku-ji. Just as the famous garden designer and Zen priest Musō Kokushi, Tengan was a disciple of priest Mugaku Sogen, the founding priest of Engaku-ji in Kita-Kamakura.

This temple became the family temple of the Ashikaga clan as well as the Uesugi clan. Both families shared the power in Kamakura. In 1439, the temple became the scene of a family drama: Shogun Yoshinori attacked Kamakura to re-establish his power in the east. The Kamakura ruler, Ashikaga Mochiuji and his son Yoshihisa were forced to kill themselves to escape capture. Hōkoku-ji is the place the 13 year old Yoshihisa chose for the ritual suicide by disembowelment better known as Seppuku (切腹) or Harakiri (腹切り) .

After the Great Kanto Earthquake in 1923, most buildings had to be rebuilt – none of the original structures remain. Still, old stone lanterns, gorinto gravestones and the yagura tomb caves make the thousand year old past come alive.

There is a small tea house hidden away behind the cool bamboo grove. For 600 yen, visitors receive a bowl of powdered green tea and traditional Japanese sweets. The carefully maintained Zen garden behind the main hall is also a nice place to rest and take in the atmosphere.

Contents of the eBook:

How to get there
Take the bus 鎌23 from the Kamakura main station. After 6 stops (about 8 min), get off at the bus stop Jōmyō-ji (浄明寺). From the bus stop, walk a few meters back, cross the street and walk straight ahead until you get to the gate of Hōkoku-ji temple.

Admission
300 yen for the bamboo garden