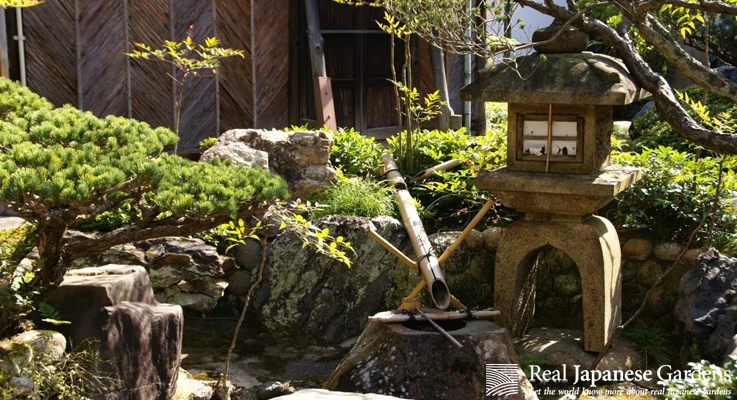 The Ōhashi-ke garden is a private garden in the traditional Fushimi Inari neighborhood in southern Kyoto. It has a special surprise for its visitors: A Suikinkutsu (水琴窟), a musical instrument in the garden. A Suikinkutsu is a jar that is buried in the earth below a water feature. This is the oldest Suikinkutsu in Kyoto. As the water trickles from the basin through a layer of gravel and into the jar, the sound of the water drops is echoed by the walls of the jar. Listening to this soothing sound is said to have a cooling effect on the listener – very welcome on Kyoto’s hot summer days.

We arrived on a sunny Sunday morning and were greeted by the white-haired Ōhashi-san, the owner of the garden. His great-grandfather Ōhashi Jinbei had the garden built in 1913 by Kyoto’s garden master Ogawa Jihee. Ogawa was the 7th generation of a family of Japanese gardeners. This tradition continues until today – every year, the 11th and 12th generation of the family work for two days with 6 to 7 people in the garden. The garden also features a great number of Japanese stone lanterns.


9 pages with detailed information
43 great pictures and illustrations
16MB
The eBook is delivered as PDF.

Buy eBook in English 4.95 $
Free Preview    Have a look inside!
Previous
Next
Sound of the Suikinkutsu

How to get there
From Kyoto station, take the Nara line towards Joyo. Get off at the second stop, Inari. Then walk in north eastern direction to Fukakusa Kaidocho.

Admission
The Ōhashi-ke is not longer open to the public!
Gardens 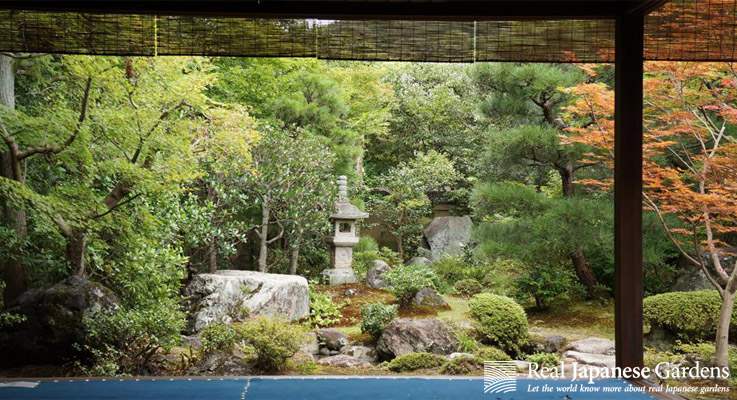 The Nishimura residence and Umetsuji residence are houses that were built for priests of the nearby Kamigamo Shrine. This type of house is called Sha-ke. The term Shake (社家) consists of the Chinese characters for “Shrine” and “Family, House”.

In some shrines, the position of the head priest has been a hereditary position – the same family provided the new head priest and other officials or servants generation after generation. Until the early Meiji period, this has been common practice in Japan. But due to misuse of authority and nepotism, the Grand Council of State stopped this practice in 1872. These families have often lived close to the Shrine, and an entire quarter full of Shake has grown over time. In 1872 the houses were officially separated from the shrines, but the families continued to live in them.

In Kyoto, the Kamigamo shrine (上賀茂神社) in the northeast of the town has such a quarter called Shake-machi (社家町). The area southeast of the Kamigamo shrine is very picturesque: A small clear creek flows next to the street, and narrow stone bridges lead to the entrances_of each house. All Shake houses are smaller than the big torii (鳥居 – vermillion Shinto shrine entrance gate) of the Kamigamo Shrine. Behind earthen walls (土塀 – dobei), trees and tall shrubs suggest old, peaceful gardens. There used to be more_than 300 houses here during the Edo period, now there are only 40 left. Only Nishimura-Ke (西村家) is open to the public on a regular basis. It has been designated a place of scenic beauty.

Buy eBook in English 1.95 $
Free Preview    Have a look inside!
Previous
Next

How to get there
Take the city bus number 9 or 4 from Kyoto station. Bus no.9 stops at Kamigamo-Misono-bashi (上賀茂御薗橋). If you take bus 4 or 46, get off at the last stop Kamigamo-jinja-mae (上賀茂神社前). Walk in eastern direction, following the small river. The Nishimura residence will be on your right hand side. For the Umetsuji residence, go straight ahead, when the river makes a right turn (at the 500 year old tree).

Opening times Nishimura-Ke
The villa is open from March 15th through December 8th every day between 9:30am and 4:30 pm.

Opening times Umetsuji residence
The villa is opening two times a year. The special opening times are announced in the Kyoto newspaper. Please ask your hotel to call in advance if you plan to visit!
075-711-2712