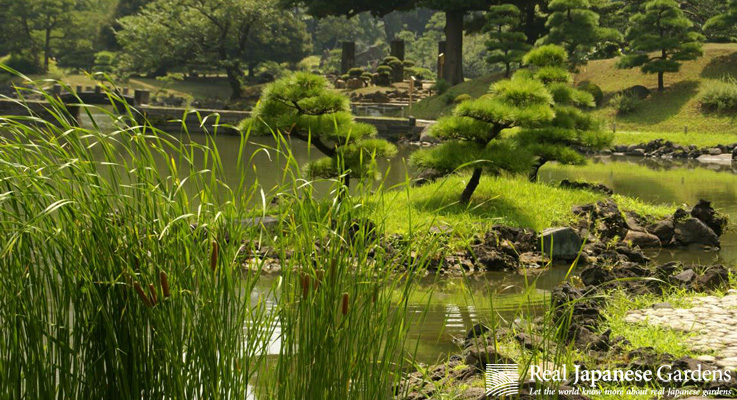 The Kyū-Shibarikyū garden is a former imperial garden in southern Tokyo. It is a typical pond strolling garden (回遊式泉水庭園) from the Edo period. The land it is built on was reclaimed from the Tokyo bay in 1658. The premises were the residence of daimyō Ōkubo Tadatomo, a politician of the Edo shogunate. The layout is typical for Samurai-style architecture (Buke-zukuri – 武家造). The owners changed again and again over the time until after the end of the Edo period (1603-1868), it was purchased by the imperial household and became the Shiba Detached Imperial Villa.

While the gardens in north Tokyo (Rikugi-en and Koishikawa garden) have a secluded feel to it, Kyū-Shibarikyū feels open and airy. The surrounding high rise buildings, the landmarks of modern Tokyo are a striking contrast to the overall softness of this over 300 year old garden. The garden itself is magnificent – immaculately maintained, small enough to oversee from one of the vantage points, and large enough to discover new views and perspectives with every turn of the path. Jenny’s absolute favorite garden in Tokyo.

13 pages packed with detailed information about this Daimyo garden
63 great pictures of the garden, its rocks, ponds and plants

14MB
The eBook is delivered as PDF.

How to get there
The garden is conveniently located next to the Hamamatsu-chō station(浜松町) of the Yamanote line. Just walk 1 minute to the west and you will get to the entrance gates.
The subway station Daimon (大門) is 3 minutes away. Use the Oedo line and Asakusa line to get here.