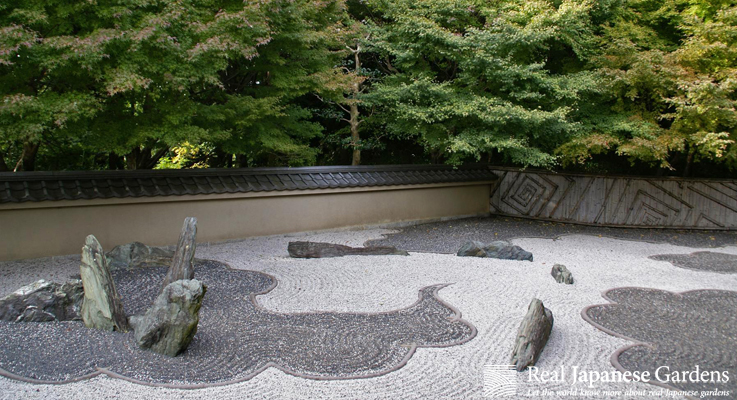 The Ryōgin-an is famous for its three gardens designed by the modern Japanese garden designer Shigemori Mirei in 1964. In contrast to the gardens, the temple and its buildings are really old. At first, it was the residence of the 3rd head priest of Tōfuku-ji, who also founded the famous temple complex Nanzen-ji. After his death in 1291, his quarters were converted into a temple in the late 14th century.

How to get there
Take the Nara line from Kyoto station towards Nara. Get off at the first stop, Tōfuku-ji, and walk in southern direction until you get to Tōfuku-ji. 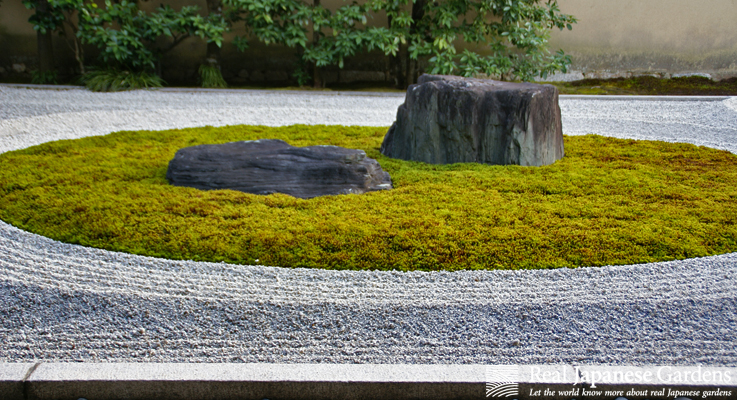 Ryōgen-in is one of Daitoku-ji’s twenty-two sub-temples. It is a rather small temple, but has several superlatives to offer:

→ One of its gardens (Tōkekiko) is Japan’s smallest garden (supposedly).

→ Another of its gardens (Ryūgin-tei) is Daitoku-ji’s oldest garden (maybe).

→ Its meditation hall is Japan’s oldest Hōjō – competing for this title with Ryogin-an of Tofuku-ji.

→ Japan’s oldest gun is on display inside the temple buildings.

The temple was found in 1502 as Daitoku-ji’s sub-temples by the priest Tokei. It belongs to the Rinzai school of Zen Buddhism. 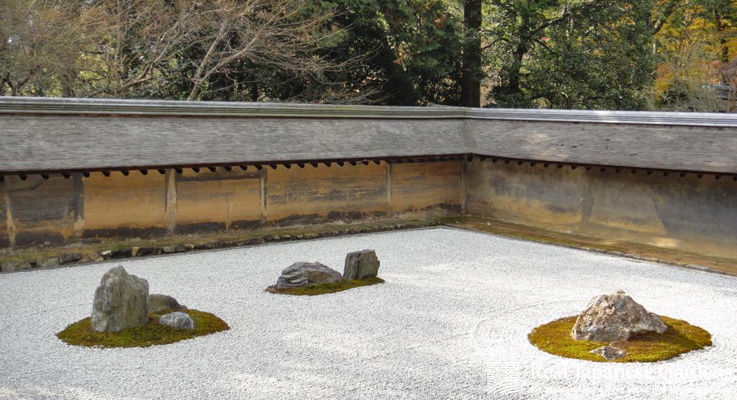 Ryoan-ji was built on the grounds of a villa of the Fujiwara clan in the Heian period (794-1185). The deputy of the shogun and warlord Hosokawa Katsumoto bought the estate in 1450 and built his residence on it, together with the temple Ryōan-ji.

It was destroyed in the Onin War, but rebuilt in 1488 by Katsumoto’s son Matsumoto. It is possible that the garden of the temple was also created at that time, but some scholars argue that it was built earlier by Katsumoto or later, for example, by Zen monk and garden designer Sōami, who also built the dry landscape garden (karesansui) of Daisen-in.

eBook will be delivered as PDF. 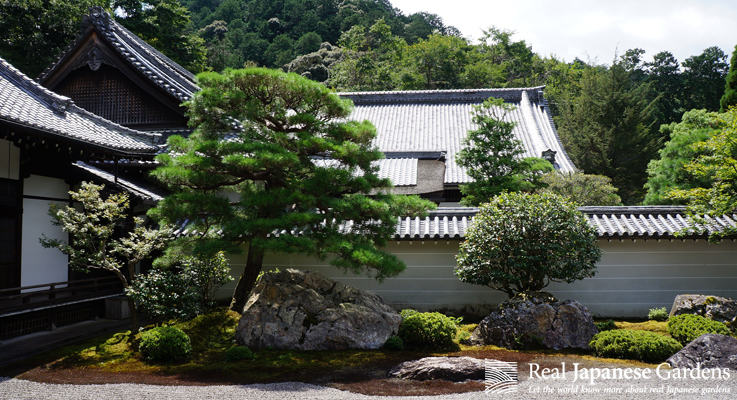 Nanzen-ji is the name of a temple and the surrounding temple complex at the foot of Kyoto’s eastern mountains (Higashi-yama). It was built in the Heian period (794-1185) on the grounds of Tennō Kameyama’s detached palace. The emperor was in favor of Zen Buddhism and supported the relatively new religion, introducing it to the aristocratic circles. It is the head temple of the Nanzen-ji branch of Rinzai Zen Buddhism.

Of special importance is the dry landscape garden (kare-sansui) in front of the Hōjō, the head priest’s quarters. The fusuma-e, the paintings on wooden sliding doors, are also impressive. They have been painted by painters of the famous Kanō school.

The most beautiful way to get to Nanzen-ji is to walk the picturesque Philosopher’s path, which connects Nanzen-ji and Ginkaku-ji, the Silver Pavilion.

As for the subway, Keage Station on the Tozai line is a short 7-10 minute walk away. If you prefer to go by bus, take bus number 5 and get off at Nanzenji-Eikando-michi.

How to get there
Take city bus number 5 and get off the bus at the Nanzen-ji bus stop. Walk about 10 minutes in eastern direction.

The temple is closed from December 28th to 31st.

Every year in June, after the rain season has begun, and the air gets hot and damp, thousands of visitors from Tokyo and Kamakura surge to the Meigetsu-in temple in Kita-Kamakura. This is the time, when the temple’s ajisai (紫陽花), the hydrangeas, are in full bloom and look their best.

Meigetsu-in is now a temple of the Rinzai Zen school of Buddhism. It was founded in 1383 (Muromachi period) by Uesugi Norikata, a powerful statesman of the Uesugi clan.

Apart from the hydrangea, which gave the temple its nickname Ajisai-dera (紫陽花寺), it is famous for an excellent dry landscape garden and the round windows of the main temple buildings. Like all Kamakura gardens, it is also beautiful in autumn when the leaves change color. 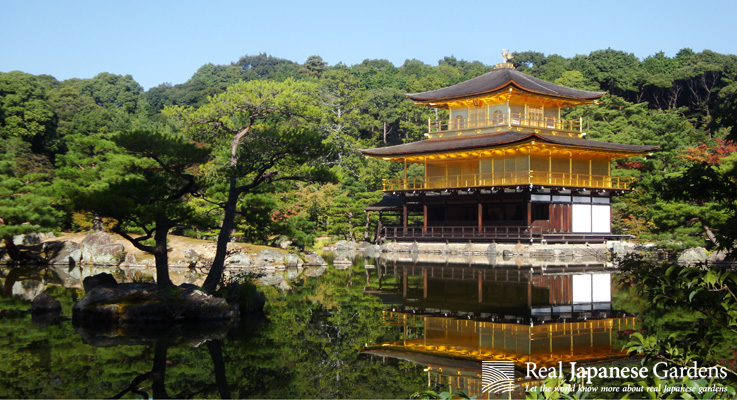 Kinkaku-ji (the more popular name for its actual name Rokuon-ji – 鹿苑寺) is one of the most famous temples in Japan and a definite must-see on you Kyoto bucket list. The awe-inspiring sight of the richly decorated golden temple that seems to float over the mirror pond is worth a visit to Kyōto alone. In combination with the numerous islands and pine trees, it looks almost surreal.

The estate was originally constructed as a retirement pavilion by the shōgun Ashikaga Yoshimitsu in 1397, it was turned into a Zen temple after Yoshimitsus death in 1408. During the Onin war (1467-77) the buildings and garden of Rokuon-ji faced the same fate as many other temples in Kyōto – they were completely destroyed by fire. Fortunately the pavilion survived the fire and the rest of the garden was restored. In 1950 the pavilion was burnt down by a young novice monk and needed to be rebuild in 1955. It was rebuilt very close to the original, although more parts of the pavilion received a leaf gold coating on the inside and outside.

The garden is an extraordinary example of a Japanese strolling garden of the Muromachi period. A path leads around the pond, offering great viewing axes and photo spots to take beautiful pictures of the temple.

If you come early, you can avoid the crowds, but have to share the garden with school children of all ages from all over Japan. A visit usually takes between 30 and 50 minutes. You can also have a cup of Matcha tea and traditional Japanese sweet (Wagashi 和菓子) in the garden. 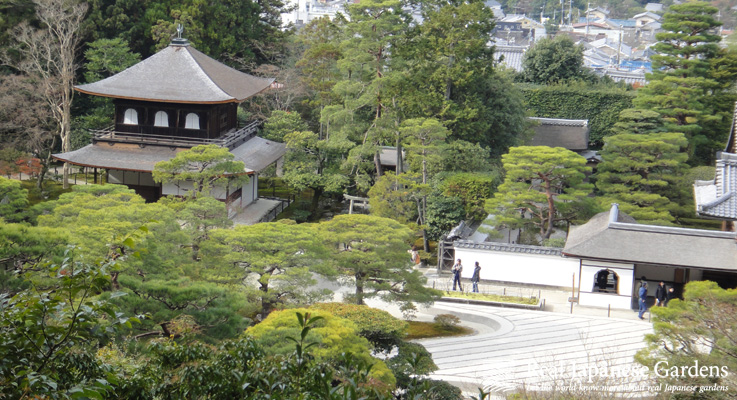 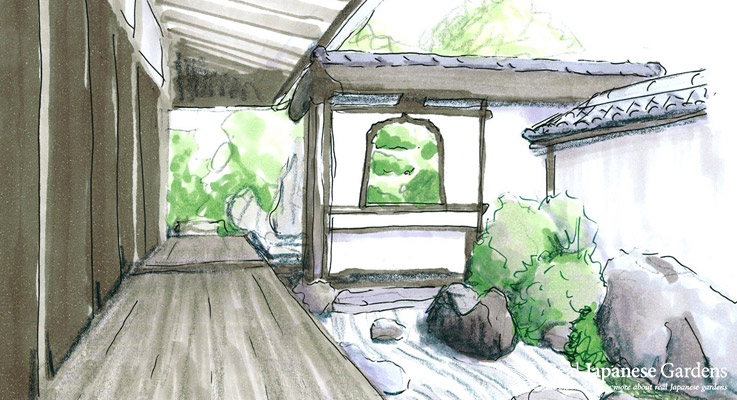 Do you want to experience Zen Buddhist philosophy first hand and meet a zen priest that makes you laugh? Do you want to find out where key persons of the Japanese history have lived and worked? Daitoku-ji and its sub-temple Daisen-in are the places to go. Here, the influential tea master Sen no Rikyu underwent strict Zen training in his early years and, as an accomplished tea master, held tea ceremonies for the Shogun under the roof of Daisen-in.

The Daitoku-ji is a temple complex with numerous sub-temples in the northern part of Kyoto. It is one of the main temples of the Rinzai school. In the height of the 16th century it became one of Kyoto’s most important temples.

The subtemple Daisen-in is one of the five most important Zen temples in Kyoto. It has five small extraordinary well maintained gardens. The gardens are all connected and tell the metaphorical story of journey through life according to Buddhism. Within the grounds of the Daitoku-ji, the Daisen-in has a position of particularly high rank. It is one of the few examples of Zen temples from the Muromachi period that still have their original form. The temple was founded in 1509 and by Kogaku Soko and was built between 1509 and 1513. Legend has it, that Soami, the great landscape designer, zen monk, and ink painter, has built the garden with his own hands. With this eBook you can discover the hidden meanings of stone arrangements, gravel patterns and the use and position of particular plants. 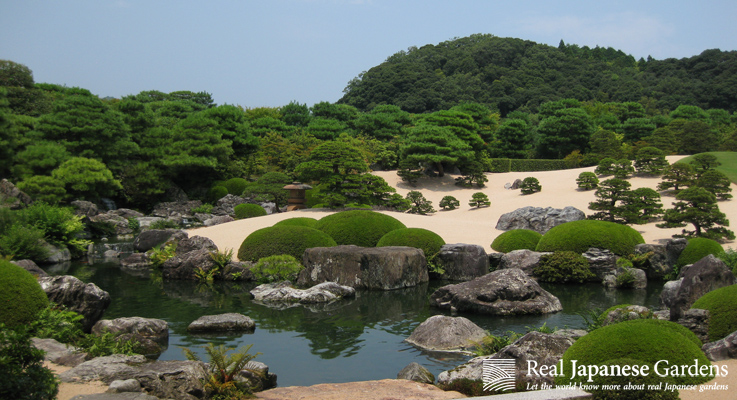 Adachi Zenko, a textile wholesaler from Shimane prefecture, opened the museum with its gardens in 1980. At this time he was already 71 years old. Adachi Zenko loved Japanese paintings and gardens since his youth. At the time he could afford it, he started to collect wonderful works of Japanese painters. When he decided to open a museum, it was an easy decision where: back in his hometown to show respect and gratitude.

There are several gardens around the museum. The main garden is the Dry Landscape Garden, but we can also find the Moss Garden, the Tea Garden, the Pond Garden, which is the oldest garden on the grounds, and the White Gravel and Pine garden, a tribute to works of Yokoyama Taikan.

The eBook about this garden was published with the support of the Adachi Museum of Art.

PDF 13MB
The eBook is delivered as PDF.

Watch the Adachi Museum of Art video here.
Buy eBook in English 4.95 $
Free Preview    Have a look inside!
Gardens

How to get there
The museum lies in a rural part of Japan in the Shimane prefecture.
From JR Okayama Station or Yonago or Izumo Airport take a JR train to Yasugi Station.
There is a free Shuttle Bus leaving every 20 min for the Adachi Museum of Art.